This article first appeared in The Edmundian 2001-2002 edition, and is used with permission.

This year marks the centenary of the birth of Bishop Christopher Butler (1902-1986), the Benedictine scholar who lived at St Edmund's as its twenty-second and last resident President from 1968 until his health deteriorated seriously in 1985.

While others may evaluate his scholarly works, laud his intellectual and administrative gifts or pay tribute to his years as Headmaster then Abbot of Downside, President of the English Benedictine Congregation and Auxiliary Bishop of Westminster, The Edmundian records with affection a priest of remarkable humility whose life in the College was unobtrusive, verging on the eremitical, but who, as Chairman of Governors, guided the fortunes of St Edmund's with a steady hand and was always available to those who sought him out for any reason. 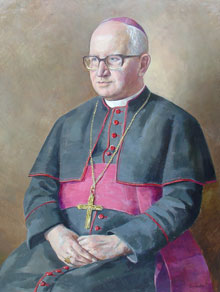 He lived on President's Gallery in the room now— unhistorically — denominated 'the President's Suite' and his private chapel was immediately opposite, on the west side of the gallery. An early riser, he was a familiar sight in the peaceful first hours of the morning taking a meditative stroll, along the terraces and drive in the summer, or through the ambulacrum and sometimes upstairs when the weather was inclement.

He usually ate alone, save when he had visitors, in the Bickford Dining Room but would join the teaching staff for post-prandial coffee and afternoon tea in the Common Room, arriving in habitually somewhat begrimed cassock with a cheerful gesture of the hand that seemed part-wave and part-blessing to those already assembled in the further reaches of the room. His conversation could be disconcertingly scholarly (perhaps only the late Father Bernard Lagrue was his intellectual equal in what was then a comparatively learned common room) but he always joined in merrily with whatever was being discussed, bringing a highly elevated tone to the proceedings. The morality of nuclear deterrence much occupied him in the early 1980s, as did the conflict in the Falklands ('Truth is always the first casualty in war' was his reaction to a Ministry of Defence spokesman delivering a singularly uninformative television briefing); but he was certainly not at a loss discussing more mundane issues. In a revealing insight into his intellectual precocity, he once described how one of the spiritual high points of his life came at the age of 15 when he first read St John's Gospel in the original Greek.

As one came to know him better, he shared his impressions of the Popes he had known well during the years of the Second Vatican Council in Rome. Blessed John XXIII reminded him, intriguingly, of 'a prep-school master who couldn't keep order; 'Paul VI was always very kind to me' and he also sat on a theological commission with 'a young Polish bishop who never had much to say for himself'; adding with a mischievous glint, 'if I'd known then what I know now' the implication being that Christopher Butler might have taken Karol Wojtyla aside and gently put him right on some matters. Yet, theological differences aside, the friendship between the two men was warm, as we saw on television by the beam with which Pope John Paul II greeted Bishop Butler outside Westminster Cathedral in 1982.

There were even rumours in the bishop's later years that he was to be raised to the cardinalate, as were other renowned theologians of advanced years as a personal honour. It was, however, always unlikely that one diocese should boast two Benedictine cardinals, apart from the fact that Butler was too theologically progressive for the prevailing mood in Rome. Instead, he was appointed Assistant at the Pontifical Throne, to the bewilderment of some of the secular media which had difficulty with this virtually archaic ecclesiastical title. Butler hugely enjoyed being shown a copy of the Keble College Record which congratulated the former Oxford tutor on being made 'an ADC to the Pope'.

When the search began for a successor to Cardinal Heenan in late 1975, the name of Bishop Butler, the Vicar Capitular, was widely mentioned, although as he was by then in his 74th year, such an elevation seemed improbable. Moreover, the then Apostolic Nuncio, the fastidious Archbishop Bruno Heim, was later reported as reminiscing that he could not imagine recommending for Westminster someone who wore his lunch on his shirtfront.

It was clear that Christopher Butler found in his years at St Edmund's a haven of peace, prayer and study in which he could devote himself to the unum necessarium, prepare for death and produce his stream of learned books, articles and reviews, assisted by his devoted secretary Audrey Blake. In the early 1980s, a young master at the College visited the bishop in his study and found him absorbed in Jean-Pierre de Caussade's spiritual classic Self-Abandonment to Divine Providence, a work he did not hesitate to recommend, saying, 'I've lived off this book for more than sixty years'. Certainly the serenity he radiated indicated that Christopher Butler lived de Caussade's teaching about finding the will of God in all the multifarious circumstances of life. What a blessing it would be if, as his spiritual legacy to St Edmund's, all present Edmundians too might find the faith and trust to recognise the loving Providence of God at every turn.

May he rest in peace. 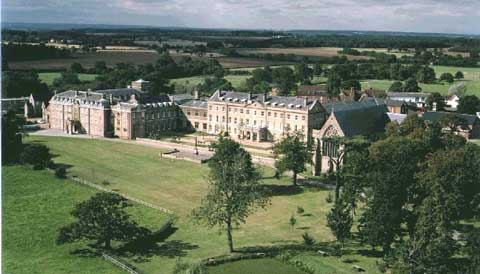 This article first appeared in The Edmundian 2001-2002 edition, and is used with permission.