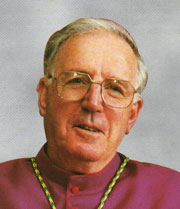 At Pentecost 1982 a pope came to Britain and turned a decisive page in the history of both Church and nation. At the end of his conversation in the Deanery at Canterbury with the group of Church leaders gathered by the British Council of Churches, Pope John Paul II invited some of you ... to visit Rome together with some representatives of the Episcopal Conferences of Great Britain ... in order, please God, to build further on the foundation so happily laid today'.

The day I set out for Rome in the company of the delegates from the British Council of Churches and of my Roman Catholic colleagues was the Feast of St Mark. The words of his Gospel read that day at Mass rang in my ears: 'And so the Lord Jesus, after he had spoken to them, was taken up to heaven; there at the right hand of God he took his place, while they, going out, preached everywhere, the Lord working with them and confirming the Word by the signs that accompanied it' (Mark 16:19, 20). In assessing the significance of this visit to Rome, it is important to distinguish between the events of the visit itself and 'the signs that accompanied it'. What was the visit saying to the Churches about the present state of ecumenical relations in Britain? Above all, what did it tell us about our reaction today to the three powerful enemies of the movement towards Christian unity, namely mutual suspicion, impatience and inertia?

Being Together Is Normal

First, suspicion. On both sides, Catholics and other Christians, there are those who suspect that the ecumenical movement is a subtle sell-out. Some Catholics feel that the past two decades have seen a progressive protestantizing of Catholicism, with a general dilution of the truths of faith and traditional devotion. Some non-Catholic Christians feel that ecumenism compromises the principles of the Reformation and that the movement towards Christian unity is blunting the genuine 'protestation' of their faith. To be fair, there is something of this suspicion in each one of us. What I would like to say, first of all, is that this visit was yet another sign of the gradual diminution of suspicion between fellow Christians. Over a number of meetings together, the particular group that went to Rome became not just two groups, of Roman Catholics and other Christians, but one Christian group seeking together to find new ways of following Christ's will for unity.

In all this, the way was opened by the invitation of Pope John Paul himself during his visit to Great Britain. It was he who had walked and talked and prayed together with Christian leaders in our land; it was he who had invited the group back to Rome to continue the dialogue. As we sat round in a semicircle with Pope John Paul in his study in the Vatican, I could not help feeling that the importance of the visit lay not just in its being a 'first' time, but rather in the remarkable ease, openness and 'normalcy' of our being together with him. 'I look upon the world as my parish', said John Wesley. In Rome it was possible to understand in a new way that a care and service of local Churches by the Holy See need not take away from their legitimate autonomy, but rather could enhance the unity and diversity of a world-wide communion. Thus for me, the first sign accompanying our visit to Rome was a sense of unity and understanding already achieved between us as fellow Christians, and a vibrant experience of the way in which mutual suspicions are diminished by mutual dialogue, understanding and love.

The second enemy of ecumenism is impatience. We cannot bypass the genuine disagreements between us. But our visit to Rome was accompanied in most of our encounters with the Roman Curia by genuine dialogue, and dialogue brings with it understanding. When Pope John XXIII spoke to the observers from other Churches at the Vatican Council he said to them: 'We do not intend to conduct a trial of the past, we do not want to prove who was right and who was wrong. All we want to say is: Let us come together. Let us make an end of our divisions.' It was in this spirit that we spoke with one another, and with many of the officials of the Roman Curia. Genuine dialogue called for self-reflection and an effort to find words and expressions that could be truly understood by other Christians not always familiar with the terminology of one particular faith. Dialogue means coming to my brothers and sisters not to debate but to discuss, not just to talk, but to listen in the conviction that the Holy Spirit is speaking in all our Churches. The second sign that accompanied our visit to Rome was an appreciation of the value of genuine dialogue, calling as it does for mutual trust, an endeavour to understand the thought patterns of other Christians and a genuine love.

The third enemy is inertia. There is no doubt that the ecumenical climate in Great Britain today is in need of fresh initiative. Recent events, particularly the visit of Pope John Paul, have added a greater urgency to this. There are some who would be content for the ecumenical movement to stand still, believing that mutual friendship and a certain degree of co-operation is sufficient for fellow Christians. But there is no option for us but to go on, because it is the will of Christ expressed in his prayer before the night he died - that those who believe in him are to be united not loosely but perfectly. The desire for this perfect oneness is the basis and foundation of our dialogue together, because we know that our present disunity is not what Christ wills for his Church. It is true we are united by a common belief in God the Father and in Christ the Saviour, in our belief in union with Christ through baptism, in Scripture as a norm of faith and of action, in the sanctifying power of the Spirit, and other truths. But it is also a fact that we are still sometimes severely divided.

Who is Christ? How is he to be found in each community? How can the truth about him be expressed and achieved? What does it mean to be a Christian? How is he to be worshipped? The fundamental reason why we must go on to seek unity in mutually agreed answers to such questions is because we are to give witness to him in the outside world and carry the gospel to every creature. As Evangelii Nuntiandi (1975) says: 'As evangelizers we must offer Christ's faithful not the image of people divided and separated by unedifying quarrels, but the image of people who are mature in faith and capable of finding a meeting-point beyond the real tensions, thanks to a shared, sincere and disinterested search for truth.' Our visit to Rome helped to point the way in which we can pursue this sincere and disinterested search for the unity that is Christ's will for his Church. One must not read too much nor too little into this particular visit to Rome in 1983; it had a modest aim and was carried through with a genuine spirit of co-operation and hope. I personally was very happy to have had such an unusual and fruitful journey of faith and discovery with fellow Christians whom I now count as friends. It was a sign that Christians in Britain today are not content to remain where they are, but are determined to explore new ways of fulfilling their desire for unity and their joint witness to Christ in the world in which we live.

Others have described in some detail the events of our week together in Rome. I would like to add one other comment on its significance. How often during our many discussions did I want to make my own the declaration of the Vatican Council:

Catholics must joyfully acknowledge and esteem the truly Christian endowments from our common heritage which are to be found among our separated brethren.... Nor should we forget that whatever is wrought by the grace of the Holy Spirit in the hearts of our separated brethren can contribute to our own edification. Whatever is truly Christian never conflicts with the genuine interests of the faith; indeed, it can always result in a more ample realization of the very mystery of Christ and the Church. (Decree on Ecumenism, ch. 4)

It had to be pointed out more than once in our dialogue together that a certain 'shorthand' was often used. Because one asserts a particular truth of faith, that does not mean one denies or denigrates another Christian truth. The Church is a mystery. Its riches and the truths contained within the Church can never be fully realized or comprehended. Even the dogmas of our faith whilst being decisive can never be exhaustive expressions of Catholic truth. That is why 'whatever is truly Christian never conflicts with the genuine interests of the faith'.

But the Church is not a kind of federation of Christian denominations. Nor is it just a gathering of those who, personally or as a community, follow Christ and devote themselves to evangelization and the service of men. The Church has an existence which precedes and transcends the conscious adherence of believers to Jesus Christ and to the particular community of which we are members. It is at once the community we build up together -'we are the Church' - and the womb that carries us, the maternal community that begets us to the life of God in Jesus Christ and through the Holy Spirit. It is in this sense that we pray in the Mass, 'look not on our sins but on the faith of the Church'. Jesus has not left us orphans, and in order to be with us till the end of time he has left us his Spirit and his Bride, which is the Church.

The Mystery in our Midst

For a Catholic a belief in the Church is a fundamental expression of faith. Conversion to faith in the Church and its mystery is not as easy as it sounds, and obstacles are there in plenty.

Our experience in Rome together revealed yet again the existing divergences between a Catholic vision of the Church and other types of ecclesial awareness. These divergences are partly the painful consequences of our failure to recognize that the Church is a reality that transcends us, one to which we are not sufficiently receptive. One of the most important requirements of future ecumenical strategy will be to find here at home the ways and means of tackling the problem of re-discovering yet again the mystery and reality of the Church in our midst. I am reminded of what a friend of mine, Dr Norman Goodall of the United Reformed Church, wrote on returning from a long visit to Rome some ten years ago:

With my Roman Catholic friends I found that even at points where, in respect of doctrine and ecclesiology, I had to say, 'I cannot accept this', I knew without a shadow of doubt that at the greatest of all spiritual depths we belonged to one another in the confidence that we were on pilgrimage with each other and with a Lord who is leading us into a fuller understanding of the term 'one holy catholic and apostolic Church' than any of us has yet perceived or experienced.

Amen to that! The signs are hopeful.